Since 2017 I have been using Voicemeeter and the virtual audio cables for Discord audio routing and streaming purposes.

I can't say when I noticed this happening originally, but I think it has been going on for several months now. I don't recall this ever being an issue back originally when I started using Voicemeeter.

I do have 2 separate PCs here that both contain completely unique hardware from one another, yet the both exhibit the same audio issues when I am listening in a Discord voice channel.

I have tried changing settings such at latency and buffer, but alas had no luck with troubleshooting my issue. I do have my sample rate (SR) set to 48000 Hz across all of my devices. I have also tried changing my device for A1. I have also done complete uninstalls and re-installs of all Voicemeeter software but the issues still persists.

I am currently running Windows 10 Professional 64-bit version 1909 on both computers at this time.

TL;DR - With Voicemeeter I hear an intermittent/random crackle/static noise when connected into a Discord voice channel and someone else is speaking or a bot is playing music. I do not have audio issues with other programs.

[Edit] I was just doing some additional testing and I logged into Discord directly on the web via discord.com. In my test I was using Mozilla Firefox, which I also have routed through Virtual Audio Cable A. During this test, with a song playing in a Discord voice channel, I had no audio issues. Normally I would just continue to use Discord in the browser, however there is functionality that I cannot use in the browser version versus the full desktop version of Discord. To me, it seems like there is something in the desktop version of Discord that doesn't seem to want to play "nice" with Voicemeeter and the Virtual Audio Cables.

I did another test where I had the Discord app use virtual audio cable B as the output source, like I had been doing. This time though I wasn't running any version of Voicemeeter and instead made virtual audio cable B my default Windows playback source. I then went into the sound settings and the recording tab to select cable B, then wen to the listen tab and chose "listen to this device" and chose my default audio playback device. While I was able to hear the audio on the Discord desktop app, it still presented the crackle/static sounds intermittently. So even after eliminating the Voicemeeter app itself and just using a virtual audio cable, my issue still persisted.
Top

Last night during a Voice Chat in Discord with my son, he was telling me how much Crackle there was in my voice.
Once I changed Discord to get input directly from my Mic, all was perfect.
Please advise.

I'm using a Razer Seiren X USB Microphone.
Into VoiceMeeter Banana Hardware Input 2.
Routed out B1 only. B1 is dedicated to audio I send to chat applications. (Discord, TEAMS, etc...) 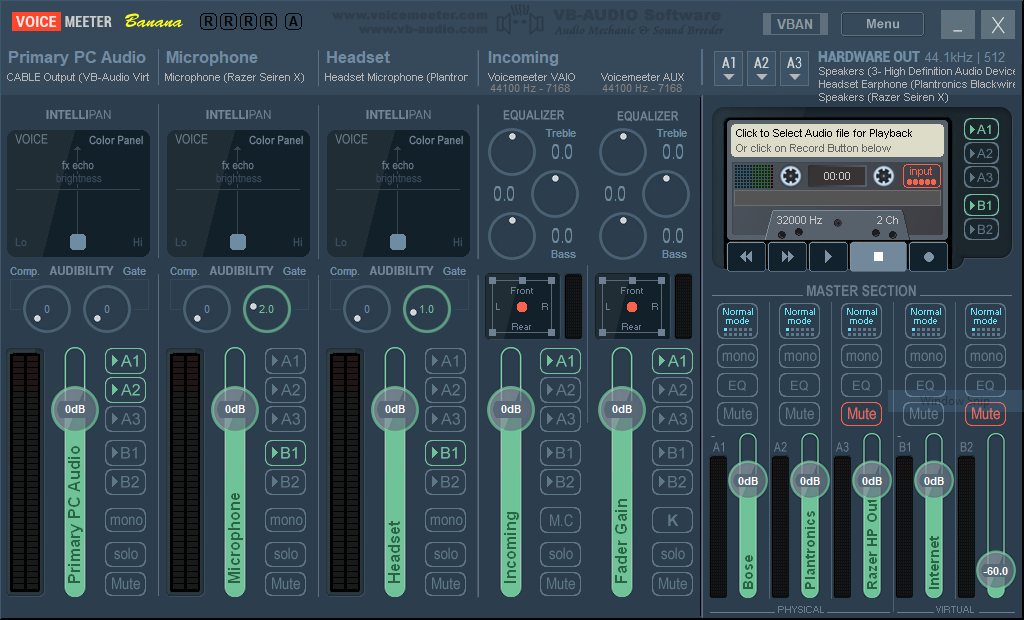 you may start by reading this wellknown topics