its probably the last time I reach out on this topic before I just ditch VB which I really dont want to do because I really like the tool.

I just want to pass 5.1 material to my Receiver, thats it!

1. First off I set up my sound output in windows to work with my receiver: 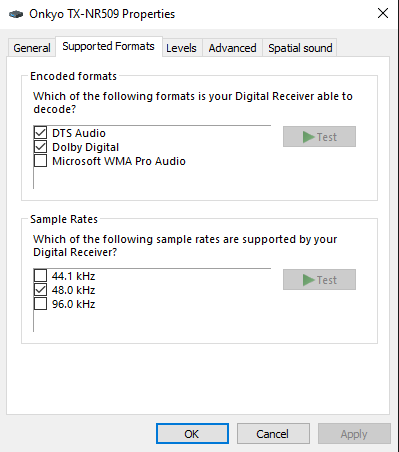 I test this without Voicemeeter Banana and everything seems to work.

2. Then I install and configure Voicemeeter 3. I go back to my windows audio settings and configure the virtual Aux input to 5.1

After this you can see on the screenshots that the bars are active on all 6 channels (playing a dts video on vlc) but when watching a 5.1 video or playing a game I missing certain sounds like voicelines so it doesnt really work there.

Also when I set up the VoiceMeeter Aux Input to 5.1 and test that only fl anr fr is playing all the other speaker show up in the window and also in the bars at the VB window but I cannot hear them...

When I select the WDM driver it seems all 6 channel are getting passed over to the receiver but then I have an annoying static noise which may have to do with the buffer settings?! 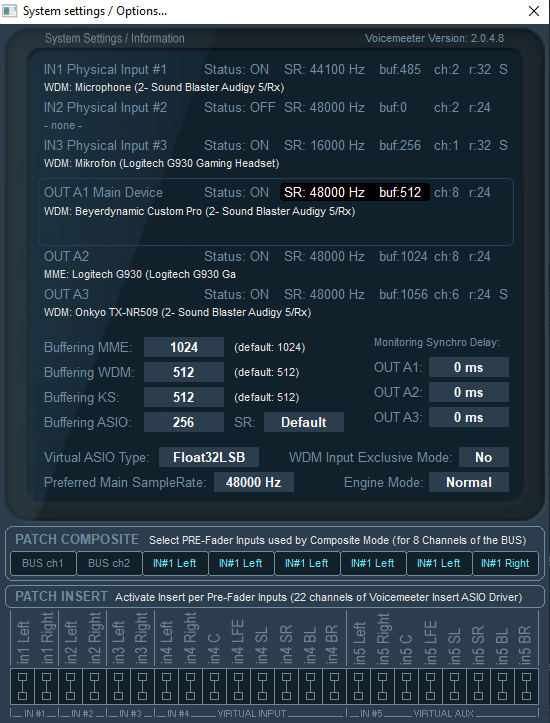 And why is Output A1 showing ch: 8? In windows I configured it as Stereo for my Headphones...
Top

you may go in CONFIGURE button related to your playback device (in Windows Sound Dialog box) and configure it as you want.
Top

I dont really understand... is there something wrong with my config or why is 5.1 not getting passed over to the receiver?!
Top

why you did not get 5.1 in your Onkyo device connected on output A3 ?
i don't know, because your Voicemeeter configuration seems to be correct.

maybe try to activate exclusive access for this device ('S' means share mode and Voicemeeter is not liking this mode too much).
or try to select MME device instead of WDM.
Top

I wish Id find a solution to this. I really like your tool, its a very handy and quick way to handle the in and outgoing buses but I tried so much already and everytime I want to play a game on my TV (which happens once a month) I have to shutdown voicemeeter, set my audio device back to standard just to play with 5.1. Its not the worst but its kind of inconvinient...

Maybe thers something wrong at the properties of the outgoing device? 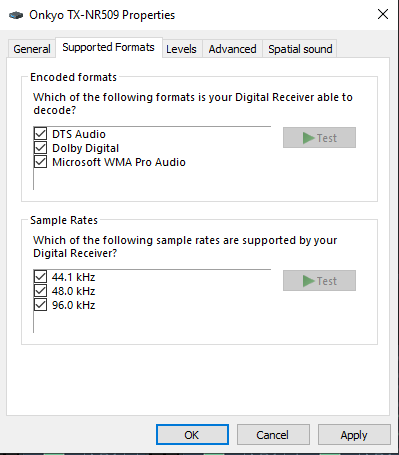 One other thing! If the default value for buffering is 512 for WDM but OUT A3 is set to 1056, does this maybe cause the distortion?
Top

TL;DR you're right, and there is nothing you can do to fix this. It's a sound card driver problem, not a Voicemeeter problem.


You will notice it almost only in Voicemeeter, but also in properly configured recording studio type apps, because they behave differently to most apps as they are not just sending audio (like a music/video player does) but have multiple audio interfaces co-existing and co-operating in both input and output directions.

I will go into some more detail here, because this topic comes up a lot. This is also for the future search engine users..... There are some minor technical inaccuracies here, they are intentional and serve the purpose of keeping it simple (well...simple-ish!). Any big nerds like me with more time than me, are welcome to embellish and correct further details, but this should do for now:


You got it. The 1056 buffer size and the 'S' next to the sound card name are telltale signs here. They tell us that the device is operating in 'shared mode' (S), and malfunctioning (wrong buffer size). This is a very common driver problem. Searching these forums for '1056' will find many examples for you, searching for 'shared mode' will find more. You will see my name a lot, because I tried to do this a long time ago and have been helping people with it ever since

Realtek sound cards are most common, so you should pay attention to threads about those, even though yours is not realtek, the problem is the same.


The problem starts with the fact that the device is not actually capable of handling so many channels. Instead, it is compressing the n-channel audio (eg 5.1=6 channels) into a digital signal representing 6 channels, but that signal is transmitted over the TOSLink/IEC958 connection. In reality, TOSLink is stereo-only, it only has enough bandwidth (ie bits per second) for two channels. It's just too slow for anything more....

But it's digital stereo, and since a digital signal is just a stream of 1's and 0's and can be interpreted any way we like, the receiver can receive a stream of compressed data, and instead of treating it as audio formatted data (as we think of it being done), it treats it as compressed data (like a zip file), decompresses it (like unzipping), and the result is n-channel audio (such as 5.1). Really, we could even send GIFs of kittens or an exe file or anything digital. over TOSLink audio cables, if we wanted to, and the receiver knew how to handle such a data format. In the case of multi-channel audio, it is like an MP3 (and yes, it is lossy like an mp3!!). We take a big audio (wav) file, compress it down so it is smaller in size, then decompress it back to something like the original. This is how Dolby/DTS/etc all work.


The real trouble comes down to how the sound cards implement this functionality. They present the OS and apps with a virtual multi-channel device, such as a 5.1 or 7.1 output, and then the software (audio player, voicemeeter, etc) sends out multiple channels (let's say 6, for 5.1) of audio, then the sound card uses SOFTWARE (in caps because this is the problem!) to take those 6 channels, compress them into a data stream capable of transmission over stereo TOSLink, and then sends that signal out of the fibre optic (or coax) output.

That layer which sits inbetween the app and the actual hardware, that's what's broken. It refuses to run as instructed (because it can't!) and refuses to set the buffer size commanded to it (because it can't!) and VM tries to overcome this and the sound card driver fights it and the result is a horrible or even simply not even working audio stream.

The reason you see stereo when using MME, is that MME does not even support this software-driven multi-channel compression approach at all, and locks you down to the actual capabilities of the hardware; stereo.


The only way I am aware, to get actual surround audio out of the PC, is to use discrete multichannel cards (all the coloured audio jacks on the back of your PC/pro audio devices) or HDMI (which actually does have enough bandwidth for all that audio, since it's designed for carrying multichannel audio from the start, as well as the much more demanding video signal) or possibly displayport (never tried to be honest, but it should work!).

Although in theory it is entirely possible for a sound card to support compressed multichannel audio over IEC958/TOSLink in hardware, I've never ever seen anything that does. They all use the software approach. You will be able to use the software-compressed approach, for apps that do not expect accurate timing and acceptable delays, such as audio/video players, but for accurate timing, low-delay interaction with other audio interfaces, which apps like VM imply, you will have to use a more appropriate audio interface such as HDMI.
Top

First off thank you for all the info...

That is infact very disappointing, especially because I only bought the soundcard just for that! Also I always thought toslink is a good choice regarding connecting the sound card with my receiver. But ya it is what it is! When you mentioned the driver I remembered that I have downloaded an unofficial driver once for testing and I may have had it still in use so I removed the driver and installed the latest coming with windows update. But that did not fix anything.

Then I plugged the toslink cable into my onboard sound and as funny as it is, I had much more options their to configure and I could even select dts interactive and dolby digital live in the default format panel (had to patch that into the audigy with APOs FX Configurator) and as I want to test that in VM I had the very same distortion and the buffersize with the WDM driver but for my surprise when using the MME driver I was actually getting outputs on all 6 channels. At least it worked testing the virtual input which I configured as a 5.1! Finding it hard to tell if it actually works on real footage. I was testing some movies but I couldnt tell. Then I downloaded a 5.1 testing video from youtube which turned out had a normal stereo line on it. So I dont know...

I was also reading about smth with the nvidia chipset. Basically you use a custom driver for nvidia graphics cards which u can connect to your receiver over HDMI and use 5.1 over that?! Maybe I should try that?! But why do I need a custom driver for that?
Top

Ok I just tested out the nvidia variant and ok thats a whole different story... Fortunately I didnt even have to install any custom drivers. I just connected it with the receiver over HDMI and then with the TV.

First I tested it without VM. The sound device immidiatly picked up the Receiver and listed all the Dolby formats: Depending on the video I put into VLC the receiver recognized the format automatically and showed it on the display.

Then I moved over to VM. The sound is still great (no Distortion or whatsoever). I tested the videos and apart of the receiver is displaying it as multichannel now (instead DTS or Dolby Digital) everything seems to work just fine. Anyway, I am glad we found a solution! Thanks for everything!
Top
Post Reply
26 posts