I am no stranger to these forums. However, I have just recently made an account because of certain findings that I have discovered and a this thread that has been recently posted:

Honestly, any recommendations of good Audio Interfaces & their Drivers are extremely helpful.
Top

well, VB-CABLE "push loss" or "pulls loss" counter does not mean that there is always a problem... if permanently increased it just mean that one audio point is not connected or no signal is coming or going into the virual cable...

if you have a problem on user side, please stay focused on it and describe it simply, possibly wit screenshot. (one problem at a time please). Normally we can solve any problem with Focusrite device.
Top

My only problem that I have with my Scarlett Solo is that when push loss occurs there is a audible crack in the playback of recordings and in the headphones.

EDIT: Okay so I did a hard install of Windows 10 & I went with the Focusrite Beta Drivers 4.36.6.0 this time around, instead of the release drivers.
At 256 buffer I still experience steadily increasing push loss...
Top

Okay so I've discovered that my nvlddmkm.sys driver, or Nvidia driver, is causing a lot of latency.

Okay well I figured out my DPC problems. 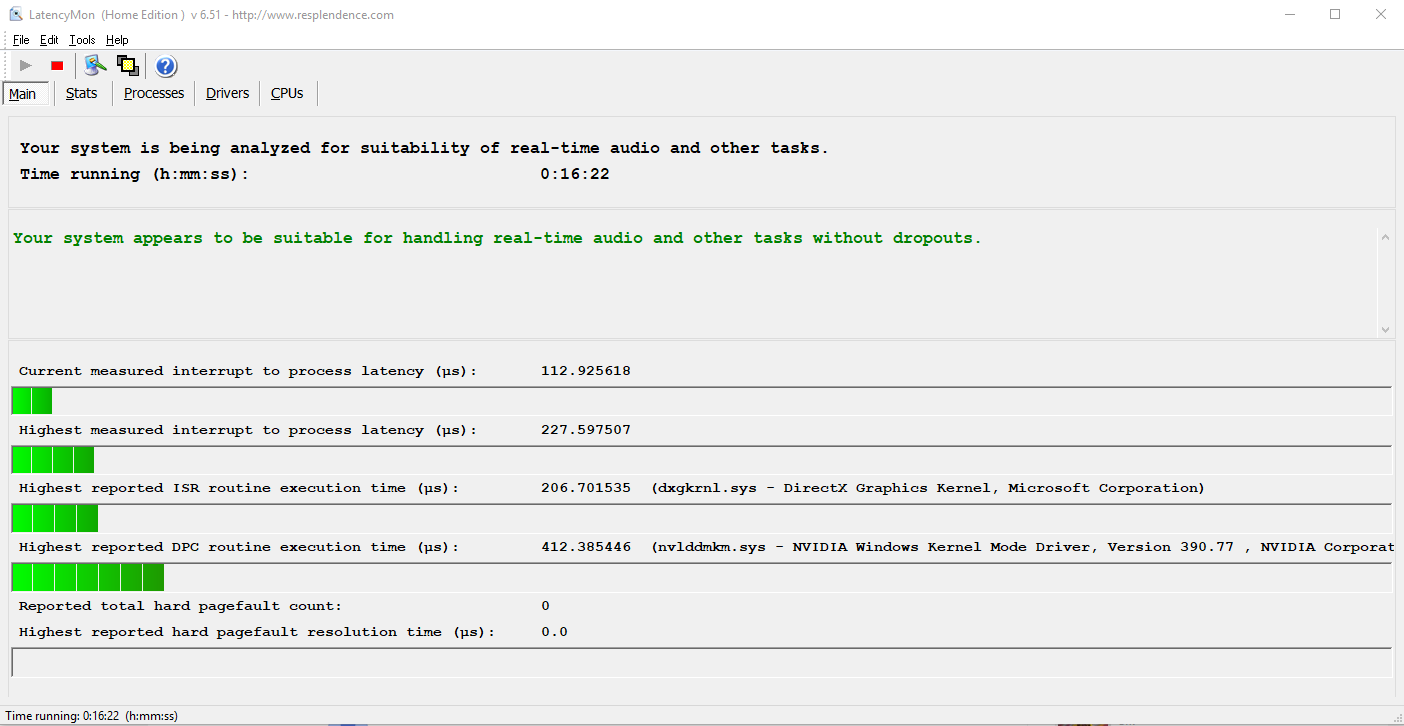 HOWEVER, now that I solved that problem I'm still getting push loss associated with clicks so I don't know what's with that.
Especially with the fact that my M-Audio M-Track 2x2 isn't clicking nor causing any push loss to happen.
I solved one problem hoping it would be my saving grace, but apparently not...
Top

thanks for this information.
having some push loss (1 per minute for example) is possible sometimes with some synchro problem, pending on system + driver + applications connected on...
the next generation of our Virtual cable / virtual i/o will manage this problem in better way.
Top

Thank you for the response. For the time being I'll just use Reaper and Synchronous Audio Router. I did get a response from Focusrite about how the drivers behave, but I'm just waiting on more information.

I'll keep you posted about it.
Top

I know that i repeat me, but I think it is exact same Problem as with my ZEDi10. Here the link to my Post.

Unfortunately no solution yet. At the moment i use voicemeeter only to route my Inputs.
Top

Okay so I used MT32-SPLite with my M-Audio M-Track 2x2 and I observed that at 256 it's ASIO driver gets not timing errors over a span of 6 hours, pretty good in my book. However Voicemeeter VAIO ASIO is having about 20 errors in that same time span.

I may have found a solution to the timing issues.

Then in the future I can just use Voicemeeter Banana as my ALL-IN-ONE Audio Solution.
Top
Post Reply
12 posts