Voicemeeter8 (a.k.a. Potato) is available now as Preliminary Beta Version! You will able to validate the essential points of this new version and test the 5 physical I/O, the multi layer mixer and our internal Reverb Fx with a complete Send / Return management.

In this preliminary version, we are missing some features: no internal Delay FX, no VAIO-3, no External AUX and the Virtual ASIO Insert driver won’t work (some DLLs will have to be changed, but requires an installation process).

Virtual Input Voicemeeter AUX. - You can't right-click and name it. (above the Voiceemter AUX wording). I right click and I see the name that I input but what I click "enter", the wording disappears and it shows as blank above Voicemeeter AUX.

The dB sliders on Bus 3-7 are having issues when Renaming them. When Renaming bus 3 and 4 renames bus 5 and 6.
Strip 7 has no renaming capabilities.
Strip 4 and 5 the slider will name 6 and 7 instead of 4 and 5.
The header for strip 4 and 5 can't be renamed.

Besides that, the software is looking great.
Top

For the features I've tried so far (select physical input device, select virtual cable input device, select physical output device, check VBAN), the features all appear to work well, but man I could use a version of Potato that displayed entirely on 1360x768. The only way I can see around that particular UI change would be perhaps to have a pair of drop-downs for number of devices the user wanted to support, for input strips (from 5-8) and output busses (5-8). That would require far more fussing around with the UI than is perhaps warranted, but might help those that don't have Full-HD screens (some laptops) or don't run their screens in Full-HD for performance reasons. Other than that, I love the redesign, it's looking good. I haven't tried renaming strips or busses, only noted that they all appeared to be "Fader Gain".

Of course my MacroButtons strips and busses were all out of whack, but that's to be expected when I was using the raw indexes (0-5) instead of names (Line-in, Mic, VirtualIn etc). Those were easy enough to set up for the new interface, just required a few seconds per button to verify the correct strips/busses were being worked with.

I would like to have the Intellipan/FX sections also on the virtual inputs.

I love Potato and i 've buy licence.

Unfortunaly, Potato do not work with my Focursite 18i20 with ASIO drivers.

I would help you to debug.
Top

it should work with your ASIO focusrite 18i20 (select it as output A1)
you can post a screenshot of your Voicemeeter system settings dialog box...
Top

Hey Vincent. I'll post screenshots of my setup when I get a chance, but for now, I've gone back to VMB, VMP is just not stable for me. I have the exact same settings for each but with VMP I get a lot of popping and crackling. I've tested with the exact same youtube videos and the sound is perfect with VMB but pops and cracks on occasion with Potato. Its enough that I just can't use it. I'll post systems settings for both when I have a chance. Thanks!
Top

Voicemeeter8 (a.k.a. Potato) is available now as Preliminary Beta Version 2 to validate last corrections (most of them related to the different reported bugs here) and test the very new promising feature showing connected application on virtual inputs (1 and 2 …).

In this preliminary version, we are missing some features: no internal Delay FX, no VAIO-3, no External AUX and the Virtual ASIO Insert driver won’t work correctly (some DLLs will have to be changed, it will be done in the next coming version included in a complete installation package). 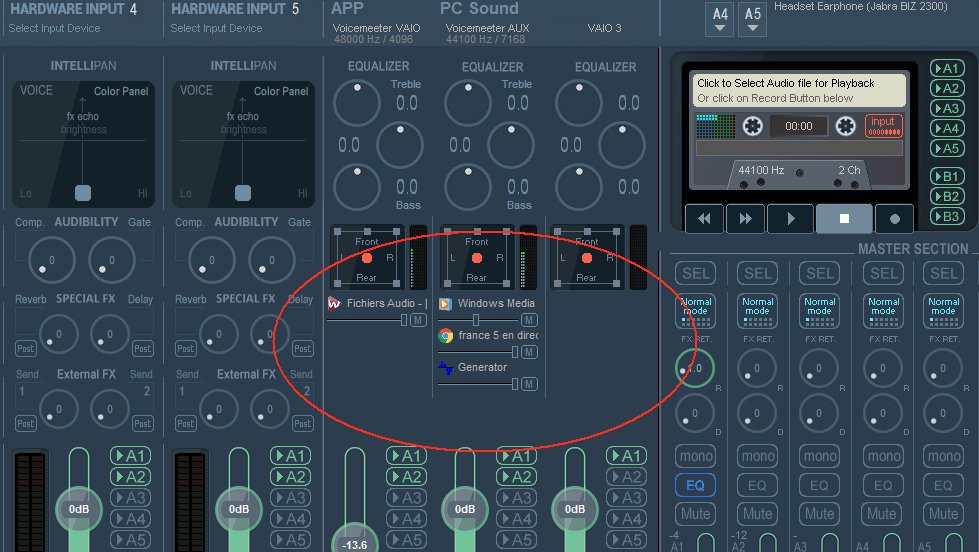 Voicemeeter 8 (aka Potato) is working on A1 with the ASIO driver for Focusrite Scarlett 18i20.It remains to elucidate how to connect my Lexicon MPX1 on the soundtrack of the external effect of the potato via my 18i20. But I will wait for the implementation of external effects. I am impatient

Have a good time with POTATO

The official solution is to add Voicemeter8.exe to the whitelist that allows changes to the Documents folder. Enjoy