I've been using Voicemeter (Banana) as a way to work collaboratively over the web, using Cubase and skype/google hangouts.
But I have run into a slight issue (not a massive one, but would just like to check I am not missing anything obvious)

I have HW input 1 set to the line in for my mic, and I route that to B1
I have VAIO1 (Voicemeter VAIO) as my main pc sound for applications I set to output to it (so Cubase, media player, chrome etc) and have that routed to A1 and B1
I have VAIO2 (Voicemeter Aux) set to be the skypr of hangout autput, routed to A2.
So basically, I hear A1 and A2, and the person at the other end, just hears B1 (A mix of my pc sound and my mic)

When I go to set the outputs for A1 and A2 though, If I select "ASIO : MAUDIO Mtrack 2X2) << i.e. my devices main asio driver...I get no output.
I have to select KS, or WDM drivers for those outputs to make it work.

So it works fine, but I'm wondering if I am getting the best performance (cubase latency, asio performance etc) by not being able to chose the maudio's asio driver as an output.......or does it not really matter?

have attached a screenshot of my current mixer frontend if my writing above doesn't make sense. 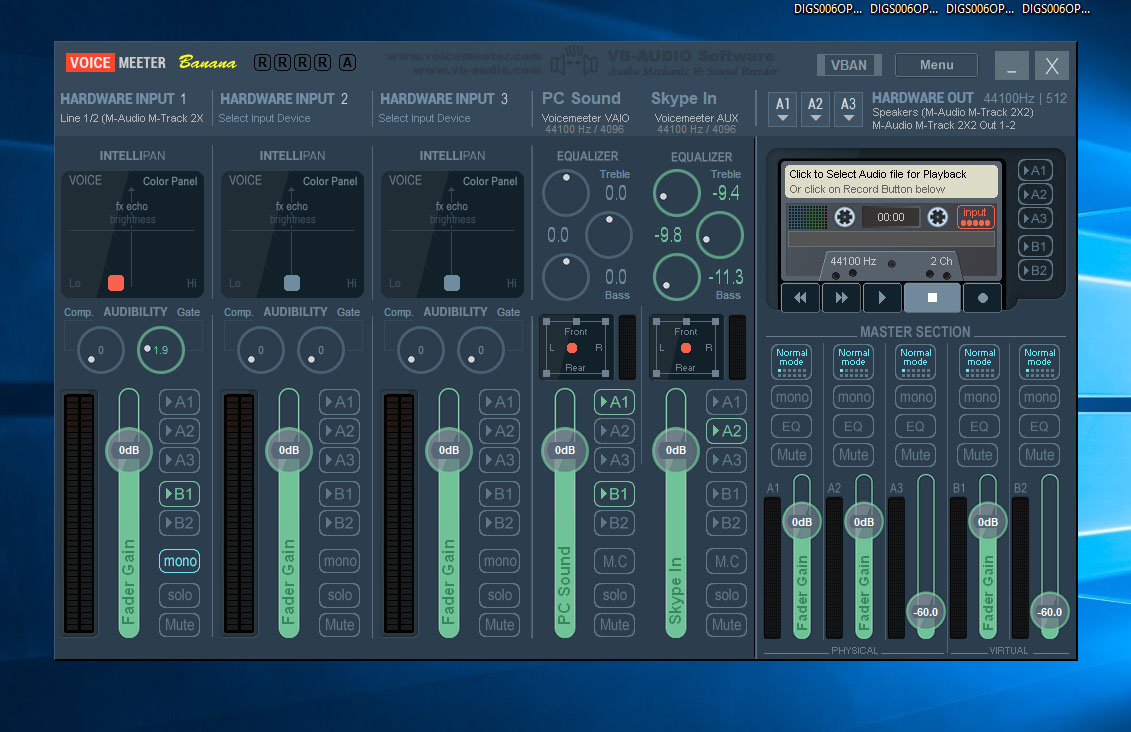 it does not appear in the list ? maybe the 32bit ASIO interface is not installed ?
Top

I can select it.....it's just that when I do, I get no audio.
I know the driver is working, as when I don't use voicemeter, and just select the m-audio as an output (in my DAW or Windows for example), it works fine.

I just get silence if I select it in voicemeter as a hardware output.

Was playing around with this the other day again.
Have uninstalled banana, and all my m-audio drivers and started again.

Unfortunately, once all is re-installed, I get the same issue. (If I choose the maudio asio as my A1, I get no sound output)
but.. I also noticed, that when I do choose that as my A1 output, my line in .. i.e. my mic, also stops sending input to banana.

If I go to my windows audio properties whilst an mp3 (or anything) is playing, but sending no sound to banana, the windows properties show that Voicmeteer input has sound going to it....but voicemeter doesn't show anything.

if you select your M-Audio device as ASIO driver for Voicemeeter Output A1 ...
then you must unselect all MME, Ks, WDM audio interface in Voicemeeter refering tot he same M-Audio device. otherwise you may get audio conflict (as far as i see, you M-Audio device is also selected as input #1 and output A2 - it should be not).
Top

even when I do that, I still get no audio out of banana 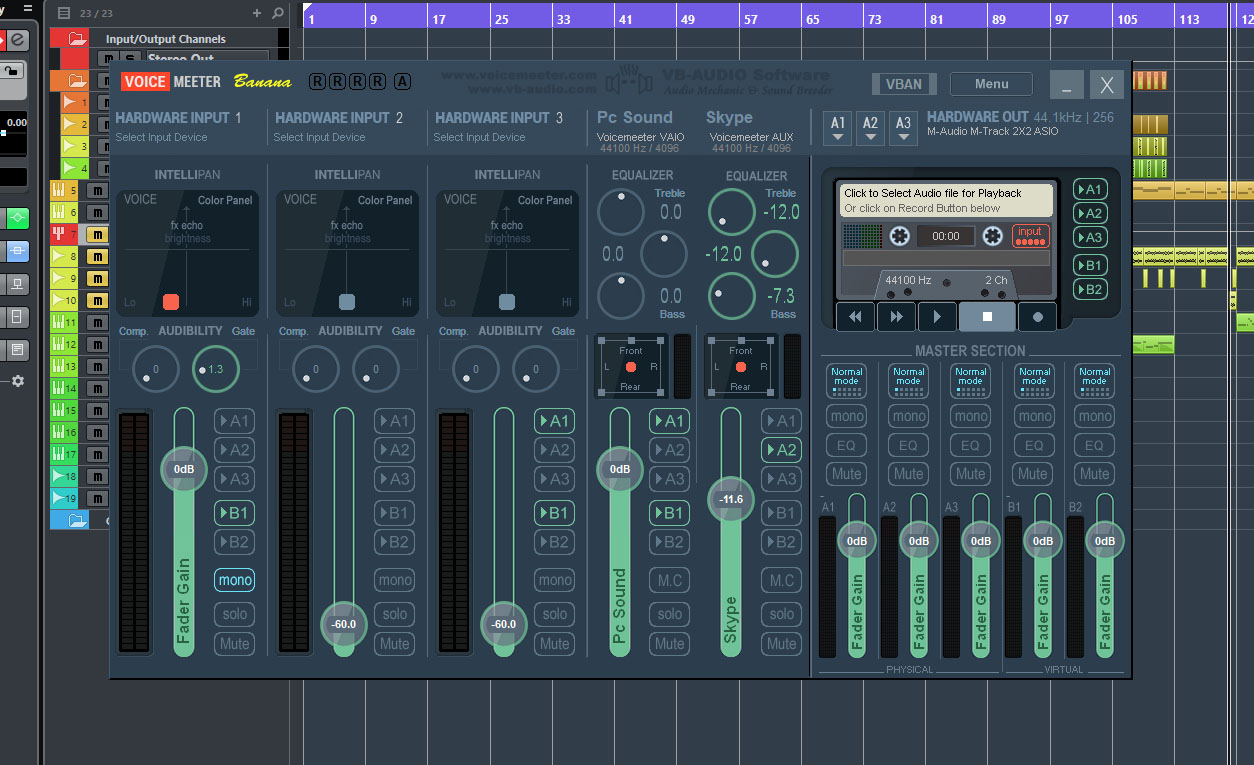 no other application is using the M-AUDIO device ?
where is connected your DAW app behind ? on Voicemeeter virtual ASIO or on your ASIO device ?
Top

Hi Vincent.
Yes, in the case above, Cubase was my only audio app running (and had it's output set to voicemeter virtual asio)

But I get the same results when just trying to play an mp3 in media player for example too....or a youtube video. Basically anything.

This is very strange, did you open your M-AUDIO specific app to check their mixer/vu-meters and possible route/mute option of the board ?
we have M-Audio Delta ASIO board running everyday with Voicemeeter here and we have no problem... are you sure your ASIO driver is not used by another app ?
Top

As for their control panel.. it's very barebones, just a buffer slider, and a monitor to show if it's "streaming" audio or not. As far as I can tell (unless something weird is running in the background that I don't know about) I don't have anything running that could be stealing the audio device.

Like I say, I can use the m-audio asio as a device in cubase (or windows etc) without voicemeter, and it seems to be working fine. Just when I try to route via VM, it thinks there is no sound

.. if I go into windows sound properties when VM is being slient on me, the 'volume test' meter in there shows audio is on the voicemeter input.. it just never arrives at banana for some reason.
Top
Post Reply
20 posts