CaptaPraelium wrote:Yep, that looks like the same issue, right down to the 1056 buffer.

Yep and it's interesting to see that the value is the same with either Dolby Digital or DTS...

Vincent Burel wrote:I'm sorry about this problem, but did not find the time to test this use case yet...
it's in our list!

At least I'm glad that you know about it, tell me if you need any help like more information or testing! ^^
Right now I'm more hyped about VoiceMeeter Potato! :p

CaptaPraelium wrote:Your other issue should go in another thread but to give you a short answer here, you could just employ the same method as the app, just create a wav file with no sound and play it on a loop.

Yeah but like I said literally no sound won't really work, the real solution is to use a background noise which spdif-ka has so I've compiled the latest version... And it's working well! I really needed to bypass VoiceMeeter or else it won't work and using a dedicated app for this purpose is best in my opinion... So this off topic issue is solved, let's not talk more about it here... 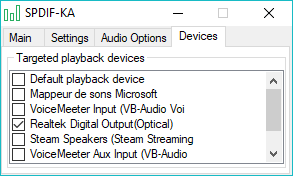 I really hope that voicemeeter surround will be working before this is released!

Well, OBS 21 is out with surround support, but I still can't use it... Feelsbadman

This realtek chipset is very common on many motherboards, I thought it would be a higher priority. Should I give up waiting?
Top

tomorrow i will update Voicemeeter with new audio format negotiation procedure, and 24bit padded 32 integer supprt... maybe it will change the things... if not , you could explain me you exact workflow to let me reproduce it and see what solution can be brought...
Top

I'm afraid that didn't work either

it seems to have improved - the buffer size is now correct....but no sound.

If it is set as my #2 output, then it seems OK, but I get no sound. If it is set as #1, then it is highlighted in red, and still no sound.
If I use MME, it works fine (with too-high latency as expected), and if I use WDM in 2-channel mode, it also works fine.
Top

One last bump. It's been like 18 months I think I should just give up, but if I can help, let me know.
Top

Hello.
I had the same problem with onboard realtek stuttering and sounding robotic-y when using WDM driver. MME working fine but a bit delayed.
I've tried all sorts of configurations on both windows settings, realteks own sound settings and voicemeeter.

The solution for me, was to uninstall realtek from control panel\add\remove programs, then go device manager and delete the audio devices.
Scan for hardware changes and let Windows fix it.

I can now rund WDM with correct buffer size (was previously stuck at 1056 as the lowest it would go, even if set at 512) and crystal clear sound.

Hope it's not too late

TLDR: Uninstall Realtek from applications and devicemanager. Reboot.
If Realtek still pops up when you plug in a new audio device, you've not done it right.
Top

And you need in windows sound prefs enable exclusive mode and both option in the exclusive area need enable in realtek spdif output. maybe you need reboot, because another program that use sound forbid that WDM switch to exclusive mode.

reviolent wrote: I can now rund WDM with correct buffer size (was previously stuck at 1056 as the lowest it would go, even if set at 512) and crystal clear sound.
....
TLDR: Uninstall Realtek from applications and devicemanager. Reboot.
If Realtek still pops up when you plug in a new audio device, you've not done it right.

So I also have the same problem, had it for 18 months, had it with VM, VM Banana and now Potato. Same PC, Asus Hero v8 with SupremeFX - but realtek chipset\software etc/

Q. If you uninstalled Realtek software\drives to fix the WDM issue
- did you lose any functionality of stuff provided by realtek drivers??

I have all of this shown up in realtek (LOTS more plugged in via USB interfaces etc) - would I loose anything if I went back to just MS drivers?
a) front HD audio (both mic and headphones - utilising separate channel than rear analog and rear optical)
b) DTS Neo (realtek) and full dolby atmos (payed M$ license) support -both work to my Home theater amp, or dolby to my dolby gaming headset
c) full 5.1 via analog outputs (rear) to my ancient 5.1 logitech speaker system - direct off the PC rear ports
d) rear mic and rear line in ports on the PC motherboard can also be plugged in and operate independently.
Last edited by DruiD on Mon Jan 28, 2019 4:32 pm, edited 1 time in total.
Top
Post Reply
54 posts