I'm not how long this has happened for, but lately it has been more frequent. I get this dialog:

Which pops back up if I dismiss it with the x or cancel, and every time it has appeared, my VoiceMeeter devices has been renamed to the default: 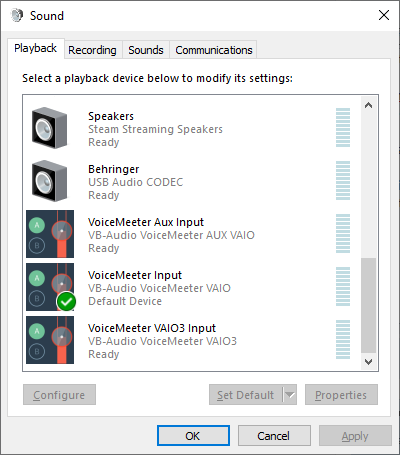 It's... annoying, not system breaking, but it makes me wonder why this happens. I'm not even sure which application causes the dialog to appear. Something I installed recently was Bigscreen VR that has a new audio driver, so that might be a plausible cause, but then it does affect the names of the VoiceMeeter devices but seemingly not the others...

Steam In Home streaming also has a separate driver since a while back, hmm.

As a side note Windows Updates can be even worse as then the names of my audio devices can shuffle around randomly, like last time where my AUX Input took on the "MIDI" name AND icon while also getting disabled as the old MIDI device was disabled. Madness.