So I had a question. I got a new headset with an adapter and found the adapter had 2 speakers. 1 is meant for unregulated changes such as chat audio while 1 is meant for everything else. So the 1 for everything else can only be set to 16 bit 48000 Hz. I figure "eh, not a problem" and made sure Voicemeeter ran appropriately for that.
But the unregulated changes sound only has 2 "options" and the choices aren't really options from the looks of it. They are both 2 Channel, 16 bit, 16000 Hz (1 being "Tape Recorder" while the other doesn't mention that part). Windows went with that by default. At first, I threw it in to figure how it will handle, but it lock errors the adapter. So I have to remove it from voicemeeter, unplug adapter, restart the audio, plug in the adapter and all audio in that adapter works again. Re-checking through the documentation, I completely forgot that the output channels only went down as far as 32000 Hz support. So I figure Voicemeeter is erroring the entire adapter for only using 16000 Hz and unable to convert it. Ironically however, the mic is routed in the adapter under the seemingly same throughput as the chat speaker, but it is routed as 1 channel, 16-bit, 48000 Hz which it can go lower, but still, it through me off. So trying it out, I set the hardware input to take in the mic through WDM. It worked without issues. The adapter is run as KS-method since I believe it was said if available, go with it, but the same can't be applied for the chat. While I could try WDM, given that the support is not 16000 Hz, I feel I'll probably get the same error.

Since the chat audio speaker portion of it can't seem to appear as another hardware input, I am probably out of luck unless there is something else I can do as the headset has its own audio slider, but it changes the receiving audio overall, not just the chat, which can make for some uncomfortable sounds and having to lower down overall sound. I figure if I can get it routed, then maybe I don't have to lower the sounds in Voicemeeter to accommodate the more clarity on any voice-based audio that comes in. Would I need some external means or would I have to settle with the idea of doing the "reverse" if you will for audio?
Top 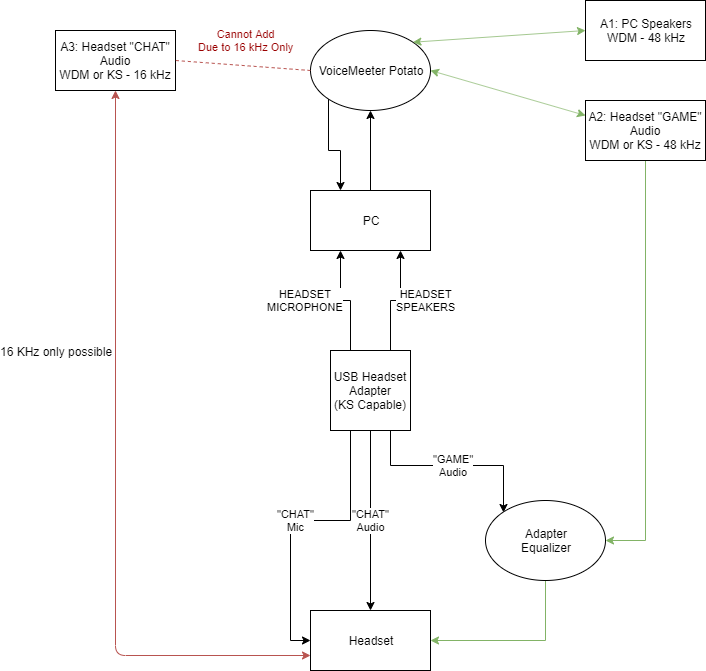 To put into an "analogy" into Voicemeter Style...

The USB Adapter has an A1 and A2 Output, both on 1 hardware channel.
A1:

What I want to do is put the "A2" of the USB Adapter's chat to Voicemeeter, but since according to the Voicemeeter Document, only 32 kHz on up is supported, this is not seemingly possible and tends to crash the USB Adapter's BUS line, thus requiring me to unplug and plug back in and restart the audio engine without the chat.

USB Adapter also has its own "Hardware 1" input for Mic and that works fine.

What I want to do is since the adapter's "A1" has its own Equalizer, it can be a little odd to hear any chat audio get mixed in with the "Equalizer" audio in A1. So I want to figure out a way to send that "A2" into Voicemeeter because otherwise, I would have to turn the volume on the headset to real high to hear chat audio correctly, but it would put the regular volume from the PC too high as well and completely different (i.e. PC Sound might be 100%, VM I have to put at -10dB for "game" or USB A1, but USB A2 might need +5dB).

So to comply, I was trying to see if there may be a way to bypass adding in the speaker that can only do 16 kHz since it cannot do the 32 kHz or if I might need some other means to route it.
Top

so, you should not have any problem...

so ,let me know your exact reference or your headset, i will buy it and see what's going on.
Top

Yes, in the doc it does acknowledge exactly what you say and I have my motherboard speakers as A1 for the purposes of keeping it the most stable and not worrying about issues with any other speakers.
A2 has the headset Speakers that go through the "Game" channel or the forced Equalizer in the adapter. It is at 48K so I have no problem. 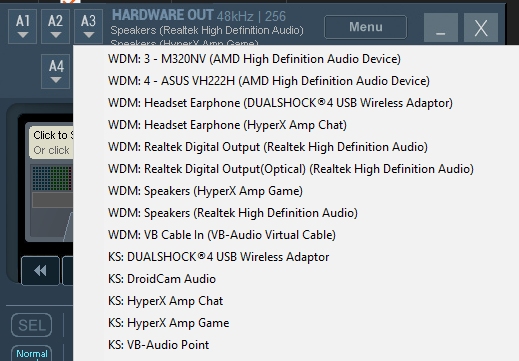 A3, if I try to set the headset speakers for "Chat" to go in regardless of WDM or KS, it crashes the adapter and I have to unplug and replug and remove this A3 from the selection to get sound to come through. That is because the "Chat" type is ONLY 16000 capable and I am guessing the Hardware Out is not set to translate 48kHz to 16000 in this case.

The problem here is that with A2, it will always go through an equalizer channel no matter what I do with the hardware because that is how its setup when you set the speaker to "Game" amp and the equalizer clearly does not have a "neutral" equalizer. The "Chat" does not have that limitation of going through the Equalizer because its just set to pass it through untouched, but for some reason, is limited to 16K. I am guessing based on one of the youtube channels about cleaning up voices is they feel that chat, you don't need more than 20kHz for voice in most cases, so the manufacture put a hardware lock on 16kHz with no override for the "Chat" portion. 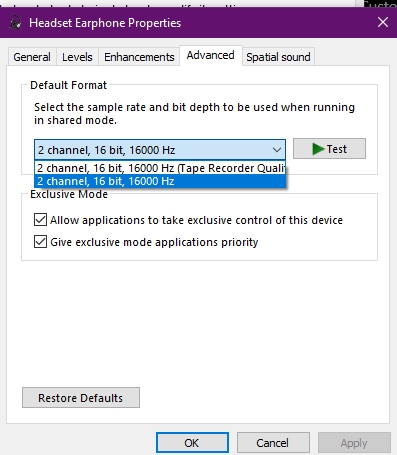 Again, it would be no problem, but, the adapter found here has its own sound increase which only affects the "Game" channel. The "Chat" I have to increase it by my Headset's volume control, but the volume control increases all sound which means, I raise the sound for the "Chat" channel, I also raise it for the "Game" channel and due to that, I have no consistency control whereas if I use Voicemeeter itself, I can regulate the sound on there and not worry about whether my "Game" channel is too loud or whether my "chat" channel is too loud. Plus, I can have the sound still go out.

What I want to do is be able to have voice chat controlled on all VOIP chats to route to the "Chat" channel so that the equalizer does not mess with their voice. But I would figure that the normal solution would be to set the chat as A1 would come in, it doesn't support more than 16K and so would crash voicemeeter instead, so I wanted to know if there would be a work around to force the "Chat" channel to be the output while still being able to take the input of the audio and put it out whereever (say VAIO 3, etc).
Top
Post Reply
5 posts • Page 1 of 1

Users browsing this forum: No registered users and 14 guests